Daikichi (Matsuyama Kenichi) learns that his recently deceased grandfather has an illegitimate daughter with an unknown mother. The girl’s name is Rin (Ashida Mana) and she is just 6 years old. Everybody in Daikichi’s family looks at the girl as an embarrassment and wants no part of her. Daikichi, annoyed by his family’s attitude, decides to raise Rin by himself. Even though Daikichi himself has no experience raising a child and is still single.

I was a little reluctant to start this movie. If you’ve read the manga review for Usagi Drop that I wrote, you’ll see my distaste for it (at least the ending). I’ve wanted to watch the anime adaptation but felt I was still scarred from the manga. So I decided to get over this and try watching the movie. Although the beginning of the manga was pure gold, I had forgotten how well it developed. As this adaptation only featured the early parts of the manga, I was able to appreciate it (although I did remember from time to time how it ends, but I pushed it to the back of my mind and decided to separate the two issues).

Now onto the movie by itself, I thought it was a heartwarming story of a young man trying to raise a child all by himself. I think it encompassed the struggle well, and I felt like I was watching a healthy relationship. He didn’t get necessarily angry when she made mistakes but was kind and understanding. He was able to alleviate a lot of her worries and was genuinely there for her. Despite not having any experience, he did put forth a lot of effort and care for the new addition to his family. I think the movie encompassed the character of Daikichi really well. He brought to life a lot of his complicated emotions while also reminding us that he isn’t all knowing but a little childish (hence some of his fantasies of dancing with a model he sees in a magazine). I was especially impressed with the actress portraying Rin. She was exceptional, especially when acting out scenes that ranged from being depressed, stressed, crying to laughing and smiling. Her range was well since I don’t have such high expectations of child actors, she really impressed me. I did think some of the dialogue she had (especially with her friend Kouki) seemed a little unrealistic for a 6-year-old and some of her actions were questionable (who runs out in the middle of daycare to see a grave?). I mean, I myself have run away from daycare, but that’s another story.

As the movie went on, it started to show the relationship between Daikichi and Rin and I think their interactions felt pretty realistic.  The conflicts they had to face were real and his worries were real. I liked watching his reactions and how he tried to deal with the problems. I was amused by his reaction when he was told to send Rin to an orphanage and also when Rin starting wetting the bed. His reactions feel normal and relatable, and I think they explored his character well. Although I don’t think there’s as much depth to the characters as I would’ve liked. There were a few scenes that made me tear up, but the work as a whole didn’t really leave me completely satisfied. They introduced a major conflict (not featured in the manga) to move the story along and show the extent of how much the relationships between all the characters have progressed, but I don’t think it added anything to the story. It felt like a completely implausible scenario and there was a sort of disconnect  from the first half of the movie. I guess because it was really succeeding at being realistic with the scenarios and reactions, but then it stopped being believable, which was a real let down. 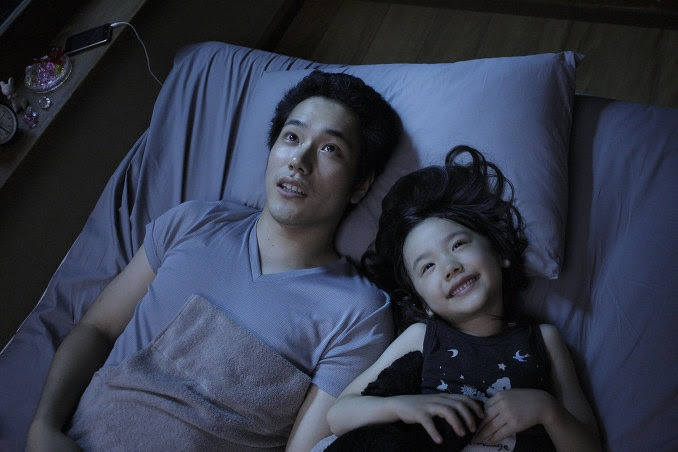 Overall, I did enjoy the movie. I think it’s worth a watch if you’re a fan of the series. If you’re interested in stories about parenting and the struggles of daily life, I think it accomplished to portray this very well. In my opinion, the character dynamics really made this movie for me. It presented with questions about life and what happens after you die. Mature themes were explored and were made through the eyes of a child, which added a unique angle to the questions and even the answers given. To explain the difficult questions was really admirable. There was a scene that stood out to me when Rin asked him about Death. He was at a loss of what to say and how to answer and I think those few moments of silence and his expressions was really powerful. Like time slowed and I could feel his genuine panic. Gems like those moments really spoke to me and made me enjoy the movie even more.

If you’re interested in seeing a list of other dramas I’ve seen,
check out my profile on MyDramaList.

Lover of books, manga and film.