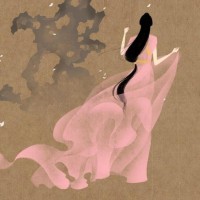 “Maiko Ninomiya is college freshman again this year! All because of the accident a year ago that put her in the hospital for half a year. Not to let the fact that she was held back a year dishearten her, she made a complete recovery. But recently she keeps seeing dreams about having passionate sex. On top of that after meeting novelist Yukiya Nagase, strange things keep happening!? The popular mysterious love comedy will make your heart and body hot!”

DL’s Notes: I finished reading this not too long ago and I’m still trying to bring my actual feelings to the surface as this manga had lots of conflicting points that made me love and hate it. One thing I can be certain of is that I loved this manga, conceptually. The premise was interesting and for the most part didn’t disappoint in delivering on it. What made it fascinating was the supernatural element. However, it played as a double-edged sword.What was initially the strong point of the manga soon turned into a contrivance, especially towards the end. Yet, it didn’t take away from my enjoyment.

I was quite surprised at how well-crafted the main heroine was, especially given the situation she was thrown in. It did suffer from the usual plague of “main-guy-borderline-assaults-maingirl-but-is-justified-because-of-her-hidden feelings”. I tend to automatically disregard these sort of scenes; manga adopting these ridiculous scenarios usually find themselves within the crux of my  neverending disgust, but I dismissed it to some extent. Perhaps it was the manner in which it was done which blended wit and comedy, coupled with the heroine having some common sense and telling the guy to fuck off when necessary. Still, at the end of the day, it is what it is and it’s something I find myself disappointed at within the medium.

With that aside, this is still a refreshing manga that explores love through self, memory, and moving on. It deals with all of these with grace and sets up the predicament of such a case with great care. The heroine is your generic shoujo heroine but with personality. Her love interest is your generic bishounen with an animalistic sensuality matched with a nurturing persona. It is littered with jealous girls, a nice guy rival, and to top it off, an adorable kid – but it blends everything together to tell a heartfelt story that even though, suffers from inconsistency and contrivances, at its core is genuine. It really adds dimension to the loving again particle, which is often times so drenched in cliche and drama that I can’t even be bothered. But here, it’s not so exaggerated or so helpless. Both characters struggle with each other as one battles his past and the other tries to bring him in her present.

I would recommend it to anyone looking for a mature tale about love, loss, and coming to terms with it all.